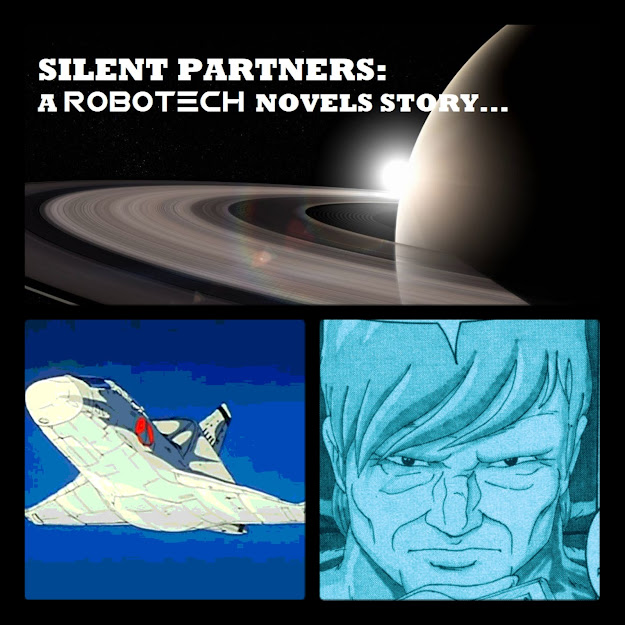 Emil Lang checked his watch. The shuttle flight to the Factory Satellite was due to leave in the next 10 minutes. He moved the takeoff time twice by an hour, much to the flight crew’s annoyance. But who was going to file a grievance against the scientist?

He looked out at the airstrip that was part of the Robotech Research Center in Tokyo. Used exclusively by the center for the shuttling of REF personnel, either on Earth or to the Satellite, it was autonomous of the Japanese government. In return, the Center provided technological support to President Misui’s reconstruction teams.

Though it could be said, that it was the Shimada Family, which allowed President Misui to make the deal with the REF.

Another trip upside for Lang and probably no returns for a few months. Final touches on the construction of the SDF-3, mass production of the mecha it would carry, crew selection. He would be involved in all of that.

And there was the immediate problem with the Zentraedi.

His meeting with Bruce went as well as one would expect. His resistance predicted. But Lang always knew that the Robotech “blood” still flowed through Bruce’s veins. The way he laid out his “consultation”. His verbal faux pas. It made Emil wonder if somewhere deep inside of the former captain, that this day would come.

Even leaving the meeting, there was no doubt in him that Bruce would be convinced that the situation was tailor made more his talents.

Perhaps the overconfidence bug that had plagued the REF at the beginning of the Uprisings had caught up to him.

His approach had all been done by the book. The idea of reaching out to Kan Shimada had been his own. Lang had been in Japan long enough to know that honorable decorum and proceed would be appreciated rather than a coup of the Family’s security chief.

And still, not a word from Bruce.

Even when parting, Lang made sure his words hit home. That Bruce was the best, and only choice considered.

And at this eleventh hour; not a word.

He could almost hear the Admiral’s reaction, “I told you so!”

Although Lang had no official military rank, the Research Center Staff showed him the respect equal, and perhaps greater than both current REF Admirals.

Emil looked at his watch again. There was no point in delaying things any further.

He turned to the co-pilot. “Let’s get going.”

They both walked toward the ship that would take them to Little Luna, the Factory Satellite’s unofficial nickname. An antique in terms of the technological advances over the years; the shuttle had been first in service aboard the SDF-1. It was the same shuttle that took then Commander Hayes to Alaska Base where she planned to argue a case for peace negotiations to her father, the first Admiral Hayes, and the United Earth Defense Council, the UEDC.

It had survived (with help from Sterling and Hunter) a Zentraedi attack on its way there. Since then, the shuttle was treated like a beloved pet. Transferred to Tokyo before Khyron’s suicide attack on the SDF-1, it had logged thousands of miles to different places, up and downside, earning the title of “Old Reliable.”

Lang took his seat and the shuttle’s pilot secured all doors beginning his countdown, finally.

As the shuttle made its launch, Emil Lang had much to consider for his arrival back to the Satellite. The contingencies that were in place if it came down to this would have to be implemented. Yet, they didn’t inspire the same confidence when as would the ***** option.

Lang inclined his head back, ignoring the shuttles push to break Earth orbit. Sometimes the Protoculture boost would push his senses to their limit and being still in his seat was the best remedy. His mind would fill with equations, theories, conclusions. But also visions that would last a split second. The Shapings and where it would all lead to. The visions, though, would never crystalize themselves enough to see where the final destination would be.

He was prepared for it. He had come to welcome these moments after so much time. In between all that he would find some sleep, a rare luxury ever since that first exploration of the "Visitor."

But a straightforward voice from behind interrupted things.

“If the brat shows even an eyelash or thinks of getting involved, I’m on the next shuttle back”, Bruce **** announced wearily.

Lang turned around. All-iris eyes glowing, which only happened in moments when the boost maxed in him. How the fu-

But there Bruce was, sitting in the seat behind him, with a look that he had not seen in their meeting. He was in.

Before Lang could respond, “And I want the full score on this,” said Bruce, “no bullshit because I’ve been smelling it from the moment you showed me the holo-pics.”

Lang gave Bruce a half smile and turned around, settling back into his seat saying, “I’ll see what I can do”, adding, “but you have my word, no interference from the brass.”

Satisfied for the moment, Bruce ***** sat back, prepared to take a road that perhaps he knew that no matter where the travels took him, would lead to.”

He felt the need to say, “And thanks, for vouching for me on this one.”

Emil Lang, trying to rest his mind said drowsily, “It actually wasn’t me who brought up your name first.”

Relaxing in his seat and closing his eyes for a quick nap before Little Luna he asked, “Yeah? Who was it then.”

The doctor smiled, lamenting not being able to see the look on Bruce’s face.