Zor's quarters were as he had left them, so long ago and far away. The sleep module, the work station, and the rest were built to human scale and function. Lang stared around himself as if in a dream.

Despite the many objects and installations that were impossible to identify, there was a certain comprehensibility to the place: here, a desk unit, there, a screen of some kind.

Roy, Gloval, and the others were so fascinated that they didn't notice what Lang was doing until they heard the pop and crisp of static.

"Lang, you fool! Get away from there!"

But before Gloval could tear him away from the console, Lang hadsomehow discovered how to activate it. Waves of distortion chased each other across the screen, then a face appeared among the wavering lines.

"Not quite, perhaps, but close, I would say," Lang conceded calmly.

Zor's face stared out of the screen. The wide, almond eyes seemed to look at each man in the compartment, and the mouth spoke in a melodious, chiming language unlike anything the humans had ever heard before.

"Like those plates and records on the old Voyagers," Roy murmured.

The alien's voice took on a different tone, and another image flashed on the screen. The humans found themselves looking at an Invid shock trooper in action, firing and rending. 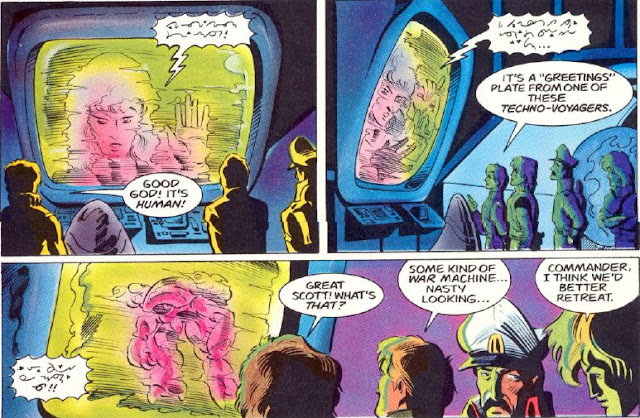